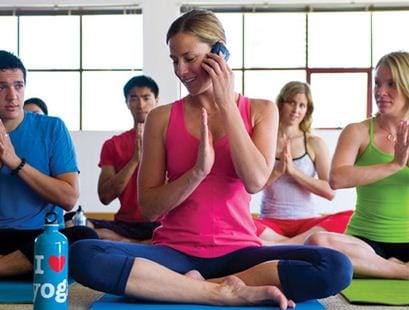 About once a year my yoga teacher friends and I get together and we drink wine and humor one another with stories of crazy yoga people in class and the sorts of things we see day in and out in this line of work. Some of the stuff is funny- like men practicing in Speedos, or boxers, when they forget their yoga shorts to girls whose butt cheeks hang so far out of their yoga shorts it’s embarrassing! Oh! Or how some students think dosing themselves in essential oils is the same as showering… you get my drift! And it’s insane how much things change in just ONE year. I mean seriously two years we were complaining how students were always late and leaving early out of savasana and last year how students refuse to turn their cell phones off/put them away and be respectful of the people practicing around them. My teacher friends, and I, had all admitted to witnessing students hiding their phones under their mats and periodically checking them throughout class. Even though there are signs in every single yoga studio in the country addressing cell phones in the studio, people continue to break the rules. If you’re a “normal” yoga student or person for that matter, you’re probably thinking, “people do that?” Yes they do, and on a daily basis. I wrote a blog about this a few years ago and I will just revisit a few things from it so bare with me if you read it before. It went a little something like this…I will point out that I have students who are ACTUAL doctors, not just ones who play one on TV (and yes, I have had those in Chicago) and who ACTUALLY save lives on a daily basis and are on-call constantly. This I get. You are ACTUALLY important and NEED to keep your cell phone, beeper and whatever else next to you, on vibrate of course, because I know in my heart that you truly do NOT want to get called away from your yoga practice. You doctors don’t have enough time for yourselves, let alone your families, and you really need your yoga. No problemo! Love you Doctor Bob! 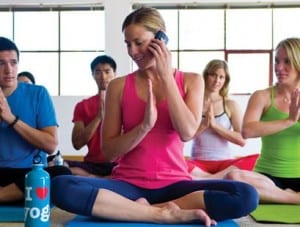 The rest of you though who think you are super important, are actually not. I see you checking your Facebook, and looking at how many “likes” your pictures got on Instagram. I even see you texting your friend asking where she wants to meet for brunch when you are done with the class you are “supposedly” participating in. Ten years ago I tossed a student out of class because her cell phone kept ringing in numerous classes of mine throughout the week, and she would run into the bathroom (which was conveniently located IN the studio, NOT in the lobby) where I, and the other students, could hear her blabbing away on the phone. The owner of the studio called her and asked her never to come back and practice there and I believe that was the right thing to do. If you can’t unplug for 60 to 90 minutes I honestly feel very bad for you.

As my Ma would always say growing up, “There’s a time and a place for everything” and yoga class is neither the time, nor the place for a cell phone. People use yoga as a time to be selfish, to turn the outside world off so they are allowed to go inward and onward without distractions. That usually means they want to pretend like it’s 1988 when no one had a cell phone and car phones were all the rage. They want that hour for themselves, so they can get completely lost in whatever they seek from their practice; flexibility, spirituality, strength, awareness, whatever it may be.

Oh! And how about when you’re in Savasana, that last juicy pose where you get to almost fall asleep, and someone’s cell phone starts ringing; whether it be in the cubbies inside the studio, where they forgot to turn it OFF, or stashed away in their yoga mat bag which is conveniently located to the right of your head? Awesome, right?!!!!!! So the next time you head inside to class, take one second, because that’s all it will take you, to turn it off and leave it outside the studio or in your car’s glove box… wherever! Just not in my class please… for yoga etiquette’s sake!

BUT….. now the problem is much, much worse. Back to me and my yoga teacher friends.. we would like to personally thank you Apple technology for deciding to make the iWatch because it’s just one more thing us humans need.. especially while practicing yoga! I KID YOU NOT. It’s worse than the “cell phone in the studio” epidemic. Because now instead of actually having to go to all the trouble of hiding the cell phone under the mat or in your pocket or down your pants, it’s even smaller and strapped onto your wrist. And who can resist looking at their watch when it’s vibrating away on the surface of your skin?

At least three times a day I catch a student looking at their iWatch throughout class. And I don’t mean a quick glance. I mean they actually get out of downward dog and drop to their knees, only to spend at least 10-20 seconds scrolling through whatever it is that is more fascinating than what I’m teaching I guess. I thought it was just me that noticed but then two weeks ago my friend who always takes my class, was like, “what is up with that chick who keeps looking at her texts in every class! Seriously?”

So I asked my other yoga teacher friends and they said they have been seeing the same thing and it’s getting even worse the cheaper the watches get in price; especially when you can find them used on eBay for little money I’m told. Like I said above with the whole cell phone argument, I honestly feel bad for those who can’t shut the outside world out. As the years pass, it seems yoga classes get shorter and shorter so maybe you’re in class for 60 minutes… but what is the purpose of practicing yoga? To detach! And you can’t DETACH unless you UNATTACH your watch from your body!

A bunch of my friends that are moms will disagree with me on this one and that is fine because I am not a mom yet and I do not know what is it like to be worrying about kids. I only worry about dogs right now and they are surprising very predictable. And the teenage daughters of my friend’s who try to bring them to yoga as a way of bonding, will probably disagree with me too. And that’s ok. Because what I do know is this: For years and years and years before accessories like the iWatch were invented, people got on their mats and practiced without looking at anything other than their dristhi, or gazing point, and moms like my Ma went about their day checking in with their babysitters and husbands by picking up the actual telephone every few hours (not minutes) while teenagers did not have social media to distract them constantly and they actually “played outside” once and awhile! And you know what, the world still continued to turn.

So what is happening is not normal- it’s just the “New Norm” I suppose. But I don’t like it! I have no hard feelings against the iWatch at all; in fact I think it’s like the Garmin watch and it’s wicked cool. It’s the “wearers of the watches” that I have my issues with! I’m wondering what you all think? Agree? Disagree? Agree to Disagree? It’s fun to be opinionated and to share options so leave a comment if you have something to say or rant about for that matter!

It’s winter (for most of you) and here’s my favorite soup recipe of all for you today! Mangia!

-6 sticks celery, chopped (SAVE THE GREENS for later!!!)

-juice and zest from one large orange

-1/2 tsp each of ginger, nutmeg, cinnamon and apple pie spice

-salt and pepper (to taste)

1. Chop up all of the veggies first, making sure to peel and deseed the butternut squash and chop it finely so it will cook faster.

2. Zest the orange and place aside with the celery greens for the garnish later.

3. Place everything in a large pot and add the milk, vegetable broth, spices, salt and pepper.

4. Cover and set on high. Bring to a boil. Once it boils, turn down to low and keep covered for 45-60 minutes. Stir occasionally.

5. When the butternut squash is cooked through, you’ll know it’s ready. Take off heat and let cool for 10 or so minutes. Then place the soup into the blender and liquify on low.

6. Take the soup out of the blender and garnish with a sprig of celery green and some orange zest! It’s vegan, vegetarian, healthy and best of all… yummy!